"It's time to worry about the next big cyber threat: killware." (MSN News: Josh Meyer, USA TODAY  10/12/2021)
(https://www.msn.com/en-us/news/us/the-next-big-cyberthreat-isn-t-ransomware-it-s-killware-and-it-s-just-as-bad-as-it-sounds/ar-AAPpD7A​)
THE STORY OF THE FIRST E-BOOK SIGNING IN THE WORLD

1 July 1999
First E-book Signing In The World!
At Checkers Espresso and Gallery, Poulsbo, WA, USA
​Checkers ebook signing for KillWare®, 17 July 1999 (purportedly the first ebook disk-signing in the non-virtual world). Thanks to the nearly one hundred people who turned out and consumed all the coffee and deserts. Special thanks to Jim Wise, proprietor of Checkers, and to Brian Lane, President of KPLUG (Kitsap Penninsula Linux Users Group), who was there with his beloved Linux box, gromit, displaying a copy of KillWare®. 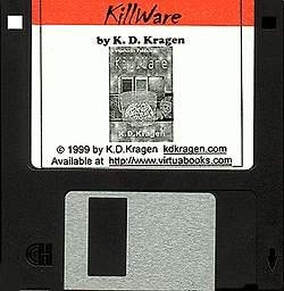 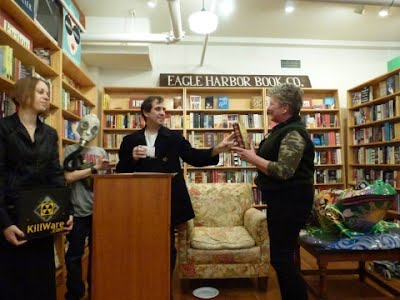 BLURB: From the creator of Plagueman, KillWare and KillWare II: The Wastes comes KillWare III: The Accidental Prisoner -- third book in the sci-fi trilogy The KillWare Chronicles by K.D.Kragen and published by ArcheBooks Publishers. ​