NOTICE: Kragen's longtime publisher, ArcheBooks, closed in 2020. Kragen's books are presently unavailable. The KillWare Chronicles and Plagueman are looking to be re-issued.
Watch for Kragen's  latest fantasy novel  Space Leviathan.
K. D. Kragen is presently looking for a new publisher and agent.
If interested in agenting for The KillWare Chronicles and Kragen's other books, contact Kragen at kdk@kdkragen.com.

THE KILLWARE CHRONICLES
​In The Conflict Between Life-extensionism & Human Mortality, Dead Always Wins

KillWare I - the online people's revolution failed to save Harry Osborne, or his brain, but Bob Howard and Mona Grant were rescued from the corp, brains intact — sorta. Thus the birth of PESD, "post-virtual epistemic stress disorder" (broken reality-connectedness mechanism).

KillWare II: The Wastes - the corp re-invents itself, as often happens with fiduciarily compromised companies seeking to "go to the next level" … or escape prosecution. This time, IntelliGen, aka Sunrise Industries, has re-branded itself IGC, Intelligent Genetics Corporation, and they are taking up residence in the world's largest pirate garbage dump called The Wastes where young brains are plentiful. And Bob and Mo once again get caught up in the machine.

KillWare III: The Accidental Prisoner - Bob has a son, Scott, whom he never saw growing up because his wife left him for Europe.
My wife dead? Bob sat up, glanced over at Mo.
Mo: Wife?
Bob: She...she left me for Europe.
Mo: Better than being left for another man. How can you compete with a whole continent?
Bob: I was young then. Long time ago. Before PESD. Before Harry's brain.
KillWare III, future present sci-fi where we live and where we die. There's a tension between life-extensionism and assisted dying, between longevity, cryogenics, Transhumanism on the one hand, and dying well and the existential reality of human mortality on the other. It's not just the what, the facts of the matter about this dilemma of the human condition: human vs. biomechanics. (Are we just our memories which might one day be uploaded into something "better" than meat-based reality, or are we that which has memories?) It's also the who, the social-ethical philosophy involved in the future — and present — that classic human drama: who gets to live, who gets to die.
​KillWare In The Press  |  KillWare Credits & Dedications  |  Veronica Of The Wastes  |  Map Of The Wastes  |  KillWare One-sheet  |  Garbology
Notice:  KillWare® is a registered trademark and the property of K. D. Kragen, KaveDragen Ink LLC
Content © K. D. Kragen. All Rights Reserved. 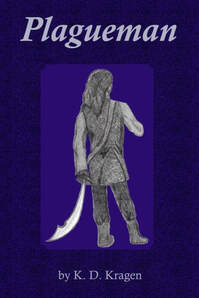 The conflict between the mystical and the barbarian in all of us.

The Black Death followed them like a flock of hungry gulls. Their ship was history's hearse, albatross and pelicans its mourners. Days passed as centuries. Dead bodies were cast into the vessel's blood-red wake. Him, too, but for the girl. Always, there was the girl, the beautiful, merciful god. The kind god who pointed to the suffering god, all the while an inexplicable happiness sparkling like dawn in her child's eyes.

Plagueman, in three hundred pages, an epic of history and death and love and death. In a time of plague, a grand celebration of suffering and passion and the Chianti Classico hope and prosciutto-pasta life of medieval Italy during the years of the Black Death. Plagueman is the story of awakening desire in the devout heart of a beautiful young girl, Theresa of Siena, who befriends a disillusioned soldier, Kierkive of Sarai. Plagueman is about the conflict between the mystical and the barbarian in all of us.

History & Historical Fiction:  In Plagueman, the following people are historical figures: the criminal Niccolò di Tuldo, Saint Rocco, Saint Catherine of Siena, Angolo di Tura, Pope Clement VI, King Charles IV. The following events are in the historical record: the progress of the Black Death from Asia to Europe; the dissolution and outlawing of the Knights Templar throughout Europe; the Popes in Avignon from 1307-1379; the inquisition against the Albigensian or Cathari (Patarini) of Languedoc, Albi, Southern France; the persecution of the Jews under pretense of the usual libels or false accusations--i.e., poisoning wells, spreading plague, drinking the blood of kidnapped Christian babies; and Pope Clement's Papal Bull of 4 July 1348, in defense of the Jews.

How I came to write Plagueman   |   Sources   |   Acknowledgements  |  Plagueman One-sheet  |  Plagueman Book Club
THE CREATURE CHRONICLES
Philosophical sci-fi/fantasy in the tradition of Jules Verne, H. P. Lovecraft, and Gladys Knight & The Pips.
Space Leviathan
“Perhaps intuition is the most powerful face of reason.”  (Edmundo Paz Soldan, Touring’s Delirium, Boston, 2006, p. 222.)
Like an astral serpent, the creature circled the outer planets, lazily pacing itself after a timeless passage through empty space. Slipping in gentle silence between the dark shadows of long cosmic sweeps, it snagged the solar winds and rode them on ancient gravity currents toward the system’s central star. Delighted light! Cosmic sustenance! The beast fed lustily on that inkling energy whose rays reached ever out even to the far frigid gateway of this simple star and its twelve companion spheres.
The creature fed and hummed and thrilled in the growing particle warmth. It frolicked and danced, swimming on to that bright starfire like a comet awakening after long icy sleep – but with purpose, and with an identity it sensed, thrilled at, rested in as the nuclear center of a luminous self-knowing, and with a name given it from most ancient time.
Gliding unhurriedly. Playing among planet rings and asteroid clouds. Following the wispy scent of gravity angels. Drawing, caressing, circling in eddies of dim sidereal force. Calling, singing celestial music, Leviathan answered the song of the twelve spheres, breathed in the cosmic rhythms while the growing solar currents blew outward and drew inward the space creature to the young central star’s fusioning furnace.
An energizing banquet, Leviathan breathed deep the small star’s sweet radiation bouquet.
Leviathan, the spaceflyer, intergalactic whale, celestial dragon whose tail sculpted the dark in swirls of rainbow night – it glided ever closer to the source of its happy immortality – beast without equal in all the cosmos, gargantua from dark matter’s ocean shores.

Creatures Of The Heart
"That we can make the stars dance, as Galileo and Bruno made the earth move and the sun stop, not by physical force but by verbal invention, is plain enough."  (Nelson Goodman. Of Minds and Other Matters. Cambridge: Harvard University Press, 1984, p 34.)
Sometime tomorrow. Or maybe the day after.

Children Of Nefila
"For the earth forever turning, For the skies, for every sea, To our Lord we sing returning home, Home to our blue-green hills of earth."  (From "Missa Gaia, Earth Mass," by Paul Winter, for the 800th anniversary of St. Francis of Assisi, Living Music Records, 1982.)
The day after that.
AMURRU
You've heard of the "Great Man" theory of history. Let me tell you another one. The "little persons" theory of history. The "little nobodies" theory of history. That's life. Really!
It's 1300 B.C.E.
Kingdoms come and go like sandstorms in the desert - dark, deadly, and usually unannounced: Sumeria, Old Babylonia, the city-state of Ashur, all sorts of them; Sakkarah, the Hittites, Assyrians, Egypt, Old Akkadia, Gutia, Middle Babylonia, Amurru, Neo-Sumeria at Ur, New Akkadia, the Kassites, the Soviets, the CIA, the State of Israel - but we're getting ahead of ourselves.
It's 1300 B.C.E.
Nothing human seems to survive very long, anymore. Nothing human seems important, anymore. Like withering grass. Like smoke in wind. What had happened to the great kingdoms, the great peoples from the dawn of time?